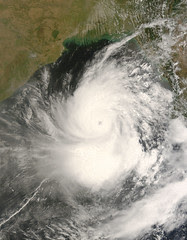 Image by TailspinT via FlickrHurricane warning; or hurricane watch means residents in a designated coastal area that may experience hurricane conditions within 36 hours. Families should enact their disaster action plan and begin to secure homes, vehicles and boats. Residents on barrier islands should consider evacuating.

Hurricane Warning - A hurricane warning indicates sustained winds of at least 74 mph are predicted for a designated area of the coastline within 24 hours. Residents should hurricane proof homes,complete required hurricane prep, disaster action plan and seek shelter in the safest location.


Hurricane Catagories, based on the Saffir-Simpson Hurricane Scale

The Saffir-Simpson Hurricane Scale is a 1-5 rating based on the hurricane's present intensity. This is used to give an estimate of the potential property damage and flooding expected along the coast from a hurricane landfall. Wind speed is the determining factor in the scale, as storm surge values are highly dependent on the slope of the continental shelf and the shape of the coastline, in the landfall region. Note that all winds are using the U.S. 1-minute average.

Winds 111-130 mph (96-113 kt or 178-209 km/hr). Some structural damage to small residences and utility buildings with a minor amount of curtainwall failures. Damage to shrubbery and trees with foliage blown off trees and large trees blown down. Mobile homes and poorly constructed signs are destroyed. Low-lying escape routes are cut by rising water 3-5 hours before arrival of the center of the hurricane. Flooding near the coast destroys smaller structures with larger structures damaged by battering from floating debris.

Winds 131-155 mph (114-135 kt or 210-249 km/hr). More extensive curtainwall failures with some complete roof structure failures on small residences. Shrubs, trees, and all signs are blown down. Complete destruction of mobile homes. Extensive damage to doors and windows. Low-lying escape routes may be cut by rising water 3-5 hours before arrival of the center of the hurricane. Major damage to lower floors of structures near the shore.

Winds greater than 155 mph (135 kt or 249 km/hr). Complete roof failure on many residences and industrial buildings. Some complete building failures with small utility buildings blown over or away. All shrubs, trees, and signs blown down. Complete destruction of mobile homes. Severe and extensive window and door damage. Low-lying escape routes are cut by rising water 3-5 hours before arrival of the center of the hurricane. Major damage to lower floors of all structures located less than 15 ft above sea level and within 500 yards of the shoreline. Massive evacuation of residential areas on low ground within 5-10 miles (8-16 km) of the shoreline may be required. Only 3 Category Five Hurricanes have made landfall in the United States since records began:

The United States possesses the most capable research enterprise, the largest economy, and the most sophisticated societal infrastructure in the world, yet it remains notably vulnerable to catastrophic damage and loss of life from natural hazards. Among weather hazards, hurricanes1 account for over half of the total damage inflicted.2 Hurricane-induced economic losses have increased steadily in the U.S. during the past 50 years, with estimated annual total losses (in constant 2006 dollars) averaging $1.3 billion from 1949-1989, $10.1 billion from 1990-1995, and $35.8 billion per year during the last 5 years. The 2005 season was exceptionally destructive, with Hurricane Katrina pushing annual damage loss over the $100 billion3 mark for the first time since records began. Added to this financial cost is the intolerable and unnecessary loss of life associated with hurricanes – 196 individuals perished from 1986-1995 and approximately 1,450 were lost in the past 2 years alone.4 Of course, hurricane impacts are not confined to the U.S.; weather-related disasters worldwide have outnumbered their less predictable, but equally important, geophysical counterparts (e.g., earthquakes, tsunamis, volcanoes) nine to one during the past decade.5

To place the Nation’s vulnerability in perspective, 50 percent of the U.S. population lives within 50 miles of a coastline.6 The physical infrastructure in coastal regions has grown dramatically over the past few decades and in the late 1990’s was worth about $3 trillion in the Gulf and Atlantic regions alone.7 Trillions of dollars in new seaboard infrastructure investment are expected over the next several decades.8 As our economy grows and the value of built-infrastructure continues to increase, the economic and societal impacts of hurricanes also can be expected to escalate.9 Although not all coastal regions are directly vulnerable to hurricanes, impacts from those regions that are affected can have national consequences, for example, via increased fuel prices and displaced citizens. Additionally, even though decaying tropical storms are an important source of fresh water for inland regions, associated flooding – occurring hundreds of miles from the coast and days after storm landfall – can be astonishingly destructive. Historically, flooding has claimed more lives in the U.S. than any other weather phenomenon10 and destructive tornadoes frequently accompany hurricanes.

Despite their destructive power, certainty of future occurrence, and advances made during the past decade in meteorological understanding and prediction, we still know relatively little about the most important aspects of hurricanes from an integrative perspective, including their internal dynamics and interactions with the larger-scale atmosphere and ocean; methods for quantifying and conveying uncertainty and mitigating hurricane impacts; associated short and long term consequences on the natural and built environment; and the manner in which society responds before, during, and after landfall. Billions of tax dollars have been provided for rescue, recovery, and rebuilding after hurricanes strike. Also important is national investment in the creation of new knowledge, and more effective application of existing knowledge to reduce these enormous public outlays, loss of life, and the associated societal disruption caused by hurricanes.

Recent hurricanes – catastrophic but not unprecedented – have focused public attention on the imperative to enhance our understanding of tropical weather systems and their multifaceted impacts, ranging from geophysical and engineering elements to human and economic dimensions. They also have heightened our awareness of the need to use new knowledge to prepare more effectively for, and respond more efficiently to, hurricanes that are an inevitable part of our future. Recognizing the many vital challenges associated with hurricanes in the broader context of natural disasters, the National Science Board (the Board) has engaged the Nation’s experts in science and engineering from government, academia, and industry in an intensive study to identify priorities in fundamental research, and complementary applied or mission-directed research, which can improve our Nation’s ability to become more resilient to hurricane impacts.

Posted by Baja Hurricane Screens, by Anita Mckenzie at 9:20 AM